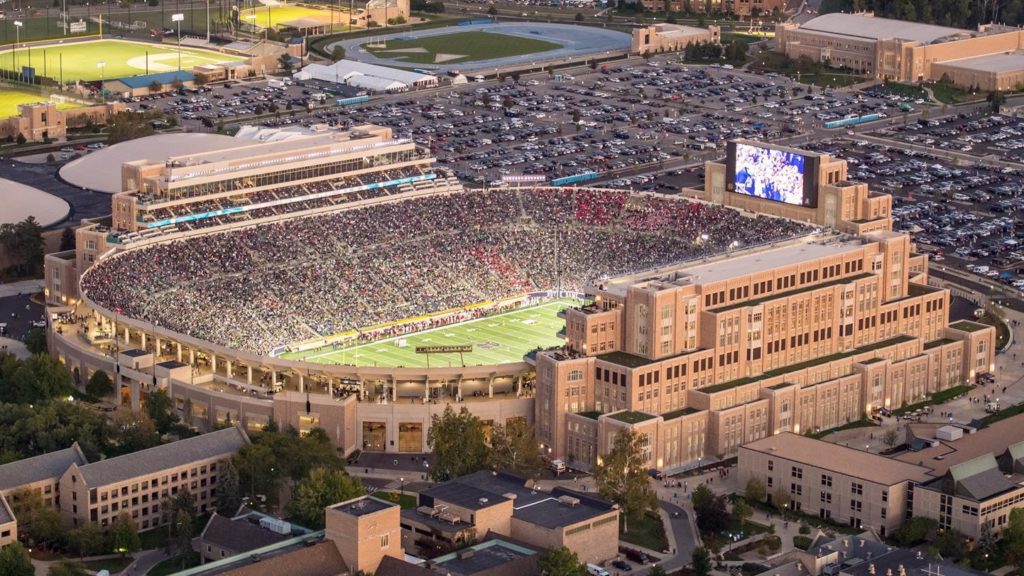 Opened 88 years ago in 1930, Notre Dame Stadium is an outdoor football stadium in Notre Dame, Indiana, the home field of the University of Notre Dame Fighting Irish. Located on the university’s campus, it also hosts commencement. The first Notre Dame touchdown in the stadium was scored by “Jumping Joe” Savoldi on a 98-yard kickoff return.

Originally, the stadium seating capacity was nearly 60,000 for decades. More than 21,000 seats were added for the 1997 season, making it reach a capacity of almost 80,000. Due to the Campus Crossroads renovation, the seat number decreased to 77,622. Additionally, after 84 seasons of playing on natural grass, the playing surface was changed to Field Turf in 2014.

Head coach Knute Rockne played a key role in its design. He kept the space between the playing field and the stands to a minimum to let fans feel closer to the games. It is designed on a smaller scale, after Michigan Stadium. Almost everything is the same except for the tunnel location.

In 1929, plans were started by Osborn Engineering of Cleveland. They were selected for their experience in designing Yankee Stadium and Fenway Park. The original stadium seated 59,075, measured a half-mile (800 m) in circumference and stood 45 feet (14 m) high. It also featured a glass-enclosed press box rising sixty feet (18 m) above ground level. Initial stands reached 55 rows.

Sollitt Construction Company of South Bend was the general contractor. Earth preparation began in the fall of 1929, however, due to an unusually cold fall and winter, above-ground construction did not begin until April 2, 1930. Despite the cold, it was effectively built in six months. Over two million bricks were used in the construction of the walls and the concrete was placed in a rigid continuous placement by section.

The construction of the stadium project was brought to a head by the actions of Rockne. The 1928 season had not been a stellar one at 5–4, however, the net profits for that football season reached $500,000. Rockne was frustrated with the slow and cautious Holy Cross priests and their indecisiveness about spending money on the new stadium. Because of this and some other issues, Rockne submitted his resignation to Father O’Donnell, the then President of the university.

O’Donnell was willing to find a compromise, without putting the university in debt to finance the stadium. With careful calculations, he knew that the excess receipts from 1928 season and the projected receipts from playing all the away games in 1929 on neutral fields would bring adequate cash into financing the building of the stadium. O’Donnell also developed a scheme to finance 240 six-person “reserved box seats”. This precursor of the personal seat license would allow the buyer to purchase tickets at face value and guarantee the same prime location for ten years depending on the amount of investment. His scheme alone helped the university raised over $150,000.

On January 29, 2014, the university announced plans to attach three new buildings to the stadium. The plans consist of more than 750,000 square feet in expansions and costing about $400 million. It is expected to be completed within 33 months. According to a published statement by the University President, John I. Jenkins, “the integrated nature of this project will maintain the compact walkability of campus, facilitate deeper connection and collaboration across the various units of the university, and offer an exciting addition”.

Other than hosting football games, the stadium has also hosted a number of other events since the change of the turf. On October 20, 2018, the stadium hosted Garth Brooks as the very first concert in the stadium. It is the first stop on his stadium tour, and it was also announced during the concert that he would also end his tour at Notre Dame Stadium. The stadium hosted the 2019 NHL Winter Classic on between the Chicago Blackhawks and Boston Bruins. Two rugby games have also been held in the stadium respectively in 1984 and 2002. Both games were Canada versus the USA.

The stadium is known for its view to the north of Touchdown Jesus. The nickname was given to the large mural entitled The Word of Life by Millard Sheets of the resurrected Jesus. The mural was installed in 1964 on the Hesburgh Library and the mosaic wall looms over the stadium.

The mural’s nickname is derived from Jesus’ upraised arms, which are similar in appearance to the raised arms of a referee signifying a touchdown. The expansion of the stadium in the late 1990s partially obscured the view of the mural from the playing field. You will be able to find the mural on the south side of the Notre Dame Stadium.

It is a must to at least take a look at the mural once you are the Notre Dame University!

For further information on the Notre Dame Stadium at University of Notre Dame, visit the pages listed below.

Sign up for our newsletter and get $5 off your first order!
You will also recieve a monthly “What’s On Guide” to your email!